skip to main | skip to sidebar

50TH ANNIVERSARY FOR CLASS 62/63 IN CANBERRA

Well is all over except for the memories. The 50th anniversary reunion of class 62/63 was held in Canberra on the 9, 10, 11 October. Thank you to the organisers Ian Mclean, Bob Davis and Jeff Chapman for making the event interesting and enjoyable. Thank you to the 38 participants who turned up in wintery Canberra to make the event a success.

We started off with a 'Meet and Greet" session at the "Tradies Club" which was attached to the Quality Hotel where most of us were staying so that made travel easy. It is no longer difficult to recognise each other as we all grow old disgracefully and we picked up with our friendship as if it was only yesterday when we last met and it certainly doesn't feel 50 years since we were all mates at ASOPA. Bill and I were so keen to meet everyone that we forgot our cameras for this session. However, we all mingled in the bar area where Jeff collected money for the banquet and gave us a souvenir cap which would identify us at venues and be a great memento. 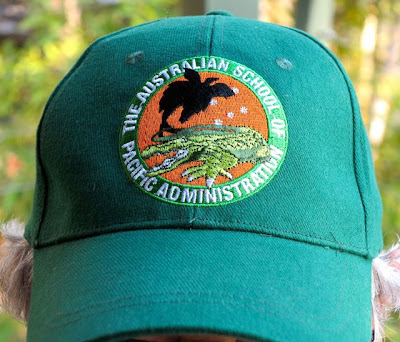 After a few drinks and much chatter and chortles we adjourned to the restaurant for a meal together. It was fun catching up with old mates.

The next morning those who wanted set off for the Botanic Gardens. Most of us depended on GPS.s to get there and once again the organisers made sure everyone had a lift. Some headed for the warm cafe,  others opted for the interesting bookshop, and the tough ones donned their coats, braved the cold and wandered through the beautiful native gardens.
At lunch time everyone arrived at the cafe where we once again enjoyed a meal together filling up 3 long tables. The atmosphere was relaxing and friendly.
After lunch there was a myriad of activities to entertain us in Canberra. Some went to museums, art galleries, shopping or just had a nanny nap. We went to Floriade, which had been on my wish list for many years. Then it was back to the hotel for a scrub up ready for the banquet at the Hellenic Club. 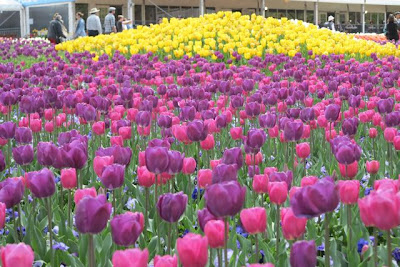 It was a short walk to the club, (well done organisers). We all met in the Foyer of the very posh club before winding our way upstairs to the Ginseng Chinese Restaurant.

Here we had a separate area for our noisy crowd, where we could move easily from table to table to find those we hadn't had a chat with yet. The meal was plentiful and delicious. The company unparalleled. 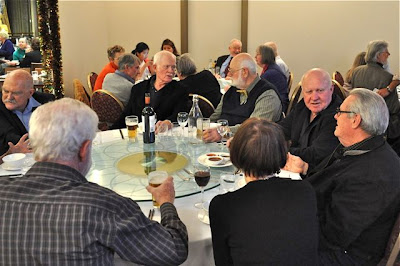 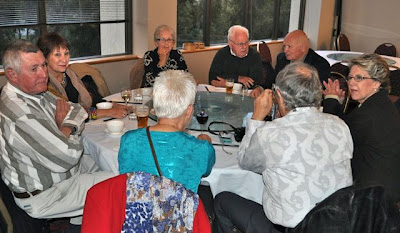 We slept well after the big day and looked forward to the farewell breakfast at "The Oaks Brasserie"at Yarralumla Nursery. Thank goodness for GPS's and for the winter woollies that I packed. Friday turned out to be freezing cold, apparently most of southern Australia copped a deep freeze for that day. Luckily the outdoor restaurant was tightly clad in protective plastic drops and had the heaters going full blast. It was conducive weather for a hot breakfast. 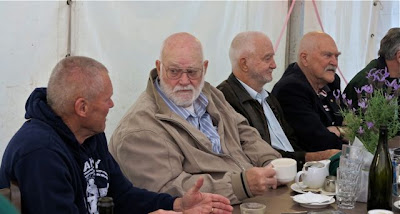 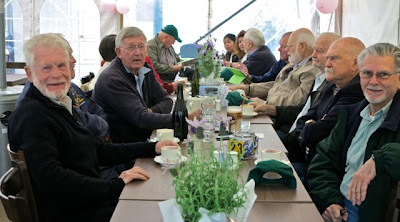 It was sad to say good bye to everyone especially as we were reminded of how many of us (10) have already passed on. Hopefully someone will take the baton and get us all together again soon.

Colin suggested to meet for lunch, so a group of four gathered at the Swiss Restaurant Des Alpes in Mitchelton today for a great lunch. 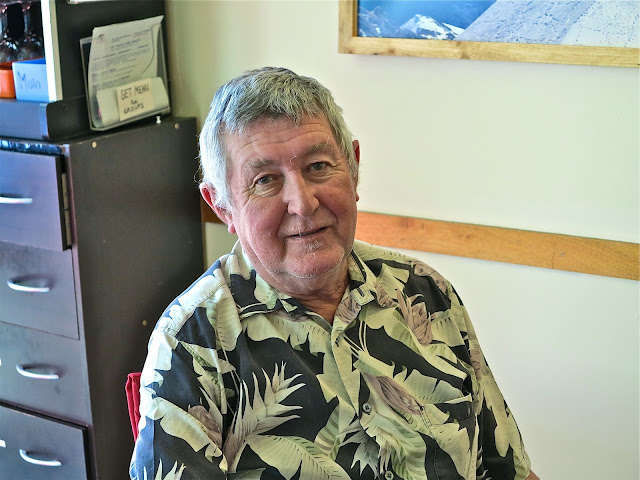 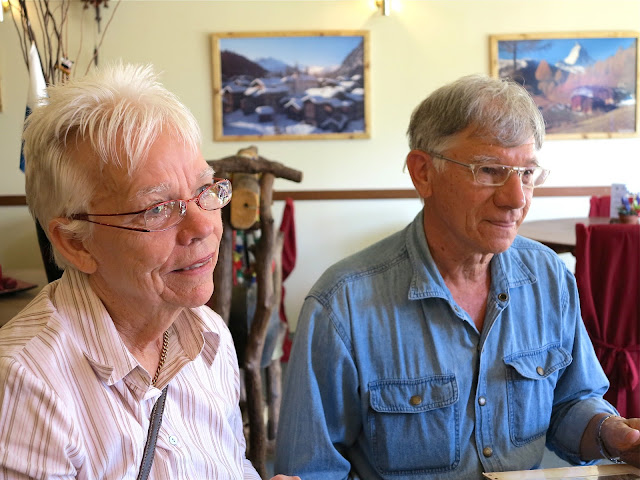 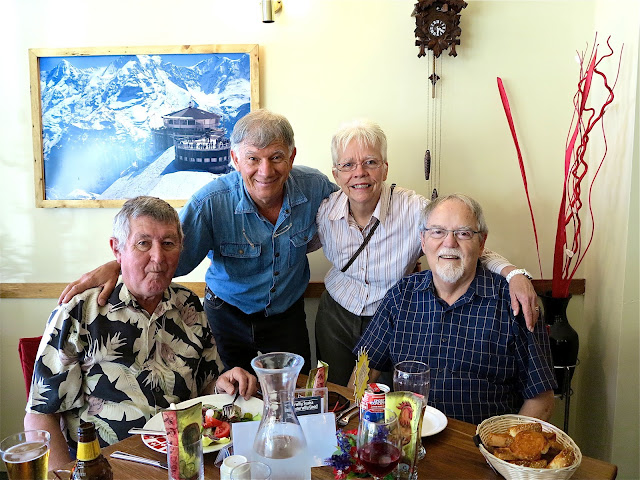 Celebration of a Life Lived Well 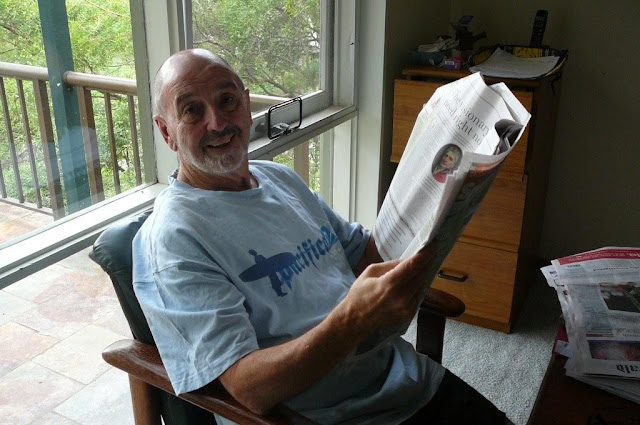 The following submission was sent to me by Rod Hard and Ian McLean:

A little over a week after dictating to his "beautiful wife Elissa" what was to become his farewell message to his many friends and acquaintances, Dubbo Dave (or any of a variety of names, including Dave's personal favourite: Desperate Dave from Dubbo), our great mate shuffled off this mortal coil at 2:30 a.m. on 29 April.

He was so happy that he made it to their 40th Wedding Anniversary the previous weekend, and that - in his last few days bravely battling cancer - he was able to go out in a wheelchair to see his 6-yr-old grandson play soccer and "produce a Lionel Messi display, kicking 5 goals."

Although in considerable discomfort, Dave discussed with his family how he would like his funeral service to be conducted. When asked how many people they should expect, Dave guessed there would be "about 30."

Was he ever off the mark! Add another 200 or so to that and you have the turnout at ‘The Celebration of Davo’s Life’ held at the Uniting Church in Berowra Heights at Noon on Wednesday 2 May.

Dave and Elissa's sons, Jack and Pete, were there for support, and both spoke eloquently, with emotion, at the rather unusual funeral which featured - at Dave's request - his beloved Hornsby BUGS Ukulele Group playing his favourites: Midnight Special, Ghost Riders in the Sky, and Lights on the Hill.

Among the huge crowd at Berowra were old friends Bob Davis, Rod Hard, Keith Jackson and Ian McLean representing the many Asopians who flooded Elissa's e-mail in-tray with condolences and messages of support: Margaret Dwyer in Perth, Bill & Diane Bohlen in Los Angeles, Mick Wilson in Melbourne, Dick Jones in Bendigo, Henry Bodman and Col Huggins in Brisbane, Howard Ralph in Sydney  ... the list goes on and on.

As Howard noted in his message: "His infectious smile was memorable!" Dick recalled "very fond memories of Dave going right back to the ASOPA days and the flat in Spit Junction, shared in 1963, and then on to Rabaul in the mid-60s."

In later years, the Kesby brand of hospitality was common for Asopians visiting Sydney who would find themselves receiving an invitation to one of Dave's legendary barbecues on the deck of their Berowra Heights home overlooking the valley and trees below. He even staged an impromptu mini-reunion in late 2002 when he learned that the Booths, Jacksons, Jones's and McLeans would all be in town at the same time.

As Keith and Dick noted in an e-mail following Dave's passing: "We marvelled at Dave's bubbly spirit, not to mention his courage in the face of his illness."

Dave's last words in his final message to his many mates are typical of his selflessness: "Thanks for all the good wishes and prayers you have sent to me. I don’t know what’s going to happen next but..."


Thanks for the submission, Rod and Ian,
Bill Bohlen, Los Angeles

I've just taken my third call (all of which were really sniffing out whether I was still in the land of the living) so here is the evidence that I probably am.

Janelle and I are just returned from a great trip to  Tassy where we attended a top event in 50th  reunion of the Port Moresby Three-peat - premierships of 1960,61 and 62. Over 80 made it and the next 50th is already on the drawing boards for Warrnambool in 2014 and the one after that in 2016 in Perth (years when the Demons also won those premierships0 We combined that with a mooch around the Island and will definitely be returning...terrific place - when the weather co-operates(as it did on this occasion).

I returned to a huge list of emails and must admit that I have deferred responding - so "No. I haven't karked it; just a big bit lazy and  fazed by the size of the task of taking you all off my "waiting" list.

Peter and Margaret Lewis visited Brisbane for a few days, so it was fitting to organise a lunch with Brisbane Asopians. Diane and Bill's Birthday Bear Group also joined for a great lunch at Brisbane's Swiss Restaurant "Des Alpes" at Mitchelton last Friday.
Posted by ASOPA CEOs at Sunday, March 04, 2012 2 comments: 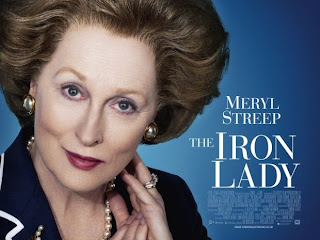 MARGARET Thatcher was a polarising influence during her remarkable tenure as Britain's Prime Minister from early May 1979 to November 1990. In Phyllida Lloyd's biopic, long-retired Baroness Thatcher (Meryl Streep) is in the early stages of dementia, constantly surrounded by voices from her past.
Prime among them is the voice of her long-suffering but very supportive husband, Denis (Jim Broadbent).
Except, he's not there. Denis had passed away several years earlier. So although Margaret has staff around her, plus an armed guard, her sole family contact is with daughter Carol (Olivia Colman).
Director Lloyd takes us from young Margaret's induction into the local
Conservative Party's organisation to winning her first seat in the House of Commons as Margaret Roberts in 1959.
Always she stays true to the ringing words of her small-businessman father (Iain Glen). "Never go with the crowd, Margaret. Go your own way."
And so we see Thatcher take her nation through the Falklands War, the 1984 miners strike, the failed IRA assassination bombing attempt at the Tory convention and ultimately German reunification when the Berlin Wall comes down.
Streep is simply extraordinary as Thatcher. The voice, the posture, the
intonation and the movement are breathtakingly precise.
If she doesn't win an Oscar at this month's Academy Awards ceremony in Los Angeles, I'm giving up writing film reviews and handing in the laptop
keyboard!
I totally agree with Richard. I was sceptical about an American Actress playing a British Dame.
But having seen her performance I admit I was wrong about Meryl Steep, she was brilliant.
Bill
Posted by ASOPA CEOs at Monday, February 20, 2012 3 comments:

Sorry Keith Rod, I took so long to tell you the news after telling you at the party that things were not travelling that well..I have included a couple of other Asopians on the roll out.


Bill could you please put it on the blog so if anybody else is interested they can have a read..I don’t know if the blog is for this sort of news if it isn’t ..no worries
Well the news is that I had my pet scan and I have two tumours ( they call them lesions) not 1 as we first thought in the liver.. the good news is that they are not very far apart
The oncologist has referred me to a liver surgeon who I will go and see  this Tuesday
The liver surgeon’s job on the first visit is twofold..he has to
1 Look at the latest pet and cat scans and see if he can do the procedure and if the procedure will be of benefit to me
2 Look at me and see if I am up to this big operation and long recuperation period
Realise this news is a bit nebulous  but that’s where we are at  the moment...Keep you in the loop
Dave from Dubbo
To which Rod added:
I think that when you put this on the blog…some reference should be made about Dave’s state of mind…
He is very positive as we found out at the lunch a week ago and will certainly not “lay down and die”….
Elissa is a great supporter and I am sure his many friends are including him “in their prayers”…
I have no doubt he will get through it..
Regards,
Rod.
Ed:
After talking with Dave at Bob's birthday bash, I too was impressed with his positive attitude. I am sure we all wish Dave all the best  and hope the outcome is successful.
Posted by ASOPA CEOs at Friday, January 27, 2012 1 comment: